A lot is expected of the modern website developer. Clients expect the finished product to support all modern browsers, both desktop and mobile. They also expect speed, responsiveness, and of course, a bug-free release. 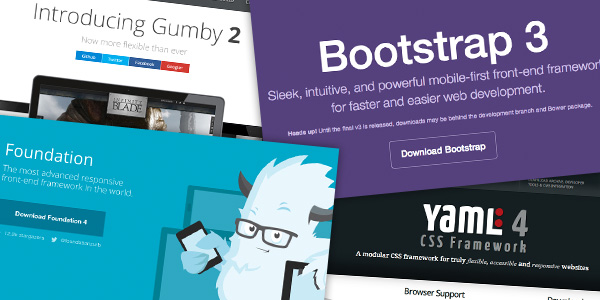 Delivering on all these requirements isn’t going to be easy. Web developers today find themselves doing a considerable amount of refining, testing, and fine-tuning in pursuit of a website that is as close to perfect as possible.

Fortunately, web designers can save themselves a lot of the stress and trouble that comes from striving for perfection. With the right framework in place, designers and developers can streamline much of the process.

Why You Need a Front End Framework

There are a number of components to a successful website. You will of course need to find a good web host, one who is able to provide you with a reliable service (99% uptime minimum). But even if you buy the best hosting package in the world, it won’t be much use if the underlying website isn’t properly designed. A CSS framework can make a significant difference to how professional your website looks.

There are a number of significant benefits to having the right front end framework in place.

There are a plethora of different frameworks out there, each with their own advantages and disadvantages. In this guide, we take a look at the most popular frameworks for web designers.

Twitter Bootstrap has become the most popular choice for a mobile-first framework. In fact, Bootstrap is now thought to be utilised on as many as 4% of all the websites out there. It also accounts for 25% of the top million websites, ranked by visitor numbers.

Why Do I Need It?

Perhaps the biggest selling point of Bootstrap is its community. That community has formed around Bootstrap because it has been so widely adopted and offers such great versatility. This community ensures that there is no shortage of useful resources for new and experienced developers alike.

Like Bootstrap, Foundation is a mobile-first CSS framework. However, there are some crucial differences to be aware of:

Foundation brings many of the same advantages to the table as Bootstrap and is a strong contender for the latter’s title of the best mobile-first CSS framework out there.

An open source CSS framework built on SASS, Bulma offers users complete flex box integration, and has emerged as one of the most popular frameworks out there.

Bulma doesn’t have the large, active, and thriving communities that Foundation and Bootstrap have. However, it is a rapidly emerging player in the market, one which will no doubt soon have such a community of its own. In the meantime, there are plenty of reasons to check Bulma out:

UiKit is another modular framework. It is designed to produce robust, modern, and fast website and web applications. Uikit occupies a similar amount of space to its biggest competitors, Bootstrap and Foundation, but it manages to offer the most impressive array of UI components and other interactive elements we have ever seen.

UiKit has a lot going for it. It hasn’t reached the giddy heights of some of its competitors, but it is certainly on the right trajectory, and it has the features to make it all the way:

Semantic UI is another front-end framework, but this one has been designed with a very unique purpose in mind. The purpose of Semantic UI is to provide developers and designers with a shared vocabulary. A shared vocabulary means that when the designer explains what they want to the developer, both parties will conjure the same image in their mind.

Semantic UI is much more than it appears at a first glance. Some developers have previously written it off as being little more than a CSS library with some extra functionality. However, it offers users a variety of tools and capabilities, including debugging and the ability to define your own elements and modules. Here are some of the key selling points.

There are a great many CSS frameworks available to modern web designers, so choosing the right one isn’t always easy. Keep the above advice in mind.